Beyond band-aids • A primer on voting reform in Canada

I just returned from the polling station, and proudly placed my ballot into a cardboard box.  In six hours, votes will be counted across Canada and while the results are still up in the air we do know one thing:  the seat count will be greatly distorted and the collective voice of Canadians will be twisted into an almost random distribution of seats in Parliament.

It’s no secret that Canada’s democracy is broken.  Our prehistoric voting system gives some parties much more power than they deserve, while other parties receive less seats than they’ve earned at the ballot box.  Our system creates artificial divisions between regions and provinces, and greatly exaggerates the rural/urban divide.  Every riding experiences some degree of ‘vote splitting’, forcing people to vote ‘strategically’ rather than with their heart.

While various initiatives like Project Democracy, Catch 22 and Vote Pair attempt to do damage control, they are simply band-aid solutions. Hopefully, in the aftermath of this election, people will start talking about real democratic renewal and vote reform.  For your reading pleasure, here’s a primer on the options:

PR and Rep by Pop

First, before we get into voting systems, let’s clear up the most common area of confusion about democratic renewal.  People often mix up the terms ‘Proportional Representation’ and ‘Representation by Population’, or ‘PR’ and ‘Rep by Pop’.  While they sound similar, they actually have very little to do with one another.

Representation by Population refers to the simple idea that every vote should be equal, and therefore every riding should be roughly the same size.  Currently, some ridings contain far more voters than others which means that each individual vote is worth less.  This is a difficult issue to address because changing a riding boundary will often benefit one party over another.  To complicate things more, there are also constitutional requirements that give each province a minimum number of seats, and there is also the whole problem of the urban/rural divide will could be inflamed by the idea of giving more seats to urban areas.  The redistribution of boundaries is necessary and inevitable, and the sooner we do it the better. (Read more here, from the Mowat Centre). But Rep by Pop has nothing to do with how we vote.

Ok, that brings us to options for voting reform.  There are three main categories of voting systems:

Plurality. This one sucks.  It’s the one we use now, and Larry Gordon (former Executive Director of FairVote Canada) likes to remind people that “our current voting system was invented when people still thought the earth was flat”. Not surprising.  In a plurality system whoever gets the most votes in each riding wins, even if the vast majority of voters didn’t want them. This is what leads to ‘Strategic Voting’.

It’s often called “First Past the Post”, which is a funny name considering that there is actually no post to pass. It should really be called ‘Closest to the Post’.  Curiously, NONE of Canada’s parties use this system to choose their own leaders or candidates. Why? Because it doesn’t work. For internal nominations and leadership races, all parties use a majority system.  Which leads us to….

Majority. In a majority race, the winner has to get at least 50% of the vote.  This is the system that SHOULD be called “First Past the Post”, because there is actually a post you have to pass: 50%.  This is done using a runoff system, where the candidate with the least votes is eliminated in each round, until one candidate has a majority. 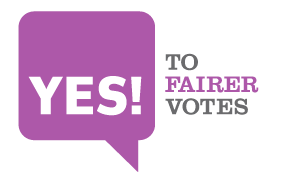 This can be done with multiple rounds (with everyone returning to the ballot box for a second or third time), or it can be done ‘instantly’ with a ranked ballot.  This is what all of Canada’s major parties use.  It’s a great system that eliminates strategic voting, eliminates vote-splitting, and encourages positive campaigning.  Heck, it’s even being used now by the Academy Awards.

Important Note: This systems has many names.   In North America it is most commonly referred to as Instant Runoff Voting (IRV) or Ranked Choice Voting (RCV).  You might also hear the term ‘preferential ballot’ or ‘preferential voting’.  In the UK, they call it “Alternative Vote”.  I don’t think this is a very good name, and I would strongly discourage advocates from using it here.  The word ‘alternative’ is often used here to mean ‘sub-culture’, ‘small’, ‘fringe’, etc.  The truth is, on the global stage, the system we currently use is fringe. There is nothing ‘alternative’ about a runoff system. It’s the most normal way to run a single-winner election anywhere in the world.

Proportional. While majority systems are a step forward, they are still a “winner take all” system, meaning that any party with low support (like the Greens), will still likely get shut out.  A proportional system ensures that all parties get seats, if they get over a certain threshold (usually 3-5%).

Some countries use a purely proportional system, with no ridings or districts – just party lists.  In Canada, we like our ridings so two systems are most commonly advocated, both which preserve ridings while also offering proportionality:

a) Mixed Member Proportional (MMP).  This system was proposed by the Ontario Citizens Assemble on Electoral Reform, and probably would have been adopted by voters if the Liberal Party hadn’t pulled funding for all educational materials explaining what it is.  With MMP, you get two votes on your ballot.  One for your local candidate and one for your favorite party.  The first vote is used to elect one MP for each riding, just like we do now.  The second vote is used to gauge party support.  If a particular party is under-represented by the riding MPs, they are awarded additional members, chosen off a party list.  Some people criticized this system during the Ontario referendum because they thought it was unfair that parties would be able to hand-pick names and put them on the list.  NEWSLASH: Parties already hand-pick names for every ballot in this country.  As long as the party is using a transparent member-driven process to nominate candidates, then what’s the worry?  MMP is a great system and probably our best bet for Proportional Representation in Canada.

b) Single Transferable Vote (STV).  This system was proposed by the BC Citizens Assembly, and received 58% support in a 2005 referendum.  Sadly, the threshold was set at 60% so the campaign ‘lost’.  This was comedic, considering that in our current system, 40% support is enough for a party to ‘win’ a strong majority, but 58% of the voters can be ignored when it comes to voting reform.  They held a second referendum in 2009, and we lost with 34% – a huge set-back for the voting reform movement.  STV can be hard to explain, but it’s a great model.  Essentially it combines clusters of ridings into larger ridings.  For example, imagine five ridings where a particular party gets roughly 20% of the vote.  In our current system, that party will get no seats.  But if those five seats are combined, and a proportional counting method is used, then they will win one seat out of five: 20%.  The complicated part is the actual vote counting. STV uses a runoff system, but rather than just eliminating candidates from the bottom there is also a ‘surplus transfer formula’ for candidates who receive more votes than they need.  Those votes are transferred, in fractions, to other candidates.  It’s mathematically beautiful, but hard to explain in a soundbite.

So there you go.  In summary:

Rep by Pop:  Every riding should have same number of voters.

First Past the Post:  Totally lame. An embarrassment for Canada.

• While there is an interesting debate to be had at the Federal and Provincial level about Runoff Voting VS Proportional systems, at the local level I’m 100% behind runoff votes and ranked ballots.  Without official municipal parties (in Ontario, at least), there is no way to implement MMP.  And using STV in major urban centres would result in huge wards that would be almost  impossible for independent candidates to tackle (both in terms of money, and physical capacity to go door-knocking on 200,000 doors).  Check out the Ranked Ballot Initiative of Toronto to learn more!

• There are many other forms of democratic renewal we can look at, in addition to Rep by Pop and new voting methods, including campaign finance reform, weekend voting, senate reform, term limits and a lower voting age.  Let’s get creative!

• Finally, I just want to add that while I admire the efforts of strategic voting initiatives, I can’t help but feel frustrated about their focus.  Rather than investing so much time and energy into band-aid solutions, I’d love to see these groups focus on real long-term change.

I admire these projects because they encourage political engagement and essentially try to minimise voter distortion – which is good for democracy.  But there are risks with strategic voting, and in the long run these projects can cause a lot of harm to a multi-party system by creating a new form of vote distortion and discouraging anyone from ever supporting an underdog.

We can do better.  If we combined all the efforts that were invested into Project Democracy, Catch 22, Vote Pair, LeadNow over the last decade, and invested all of that energy into voting reform… we could get Canada talking about real change.  Look at Avaaz, for example.  They are an international advocacy organization with over eight million of supporters worldwide.

A few weeks ago, they produced a video encouraging all their supporters in Canada to vote strategically.  But where is the Avaaz video asking Canadians to demand vote reform?

Let’s aim higher.  Let’s get educated on reform options, talk to our friends, and demand change.

Otherwise, we’ll still be having these conversations in twenty years, instead of talking about the real issues.

This entry was posted in Better Ballots, Community Organising, First-Past-the-Post is Evil, I Have Too Much Time on my Hands, Random Rants. Bookmark the permalink.