Vote with your heart. Monday is a city-wide survey of our values 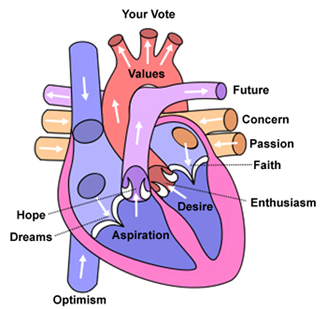 In these final days of the election, what has emerged as the hottest topic? Strategic voting.  Not streetcars or housing. Not cycling or waste reduction. Not urban agriculture or waterfront  renewal.  Not arts funding or green energy.  All of these topics have taken a backseat to the growing debate about strategic voting.  And not just for the mayoral race.  It’s happening in the ward races too, all across the city.

I’d like to contribute two thoughts to this debate.

The first thought is simple:  Vote-splitting is a completely unnecessary phenomenon, unique only to cities that insist on using foolish voting systems.  We can completely eliminate this distraction from our next election with a small and simple change called Instant Runoff Voting.  That journey begins at RaBIT.ca

Vote with your heart.

I’ll give you three reasons:

a) Strategic voting kills the comeback. What would politics be without the ‘comeback’?  The concept of the underdog gaining ground is one of the ways in which politics can be exciting, whether it’s David Miller making a comeback against Barbara Hall, Rob Ford making a comeback against the downtown progressive elite (as he calls them), George Smitherman making a comeback against Ford, or Joe Pantalone making a last-minute comeback against George.  The further back, the more exciting.  Third-place comebacks can only happen if a candidate’s supporters vote with their heart, ignoring calls to give up.  Imagine how boring American Idol or Battle of the Blades would be, if contestants just gave up and dropped out along the way, because they thought they probably couldn’t win.  That would be bad TV.  And it’s bad politics too.

b) Don’t let the pollsters shape the elections. Strategic voting is based on the premise that you already know how everyone else is going to vote – before election day.  This is based on polling that has been provided to you by media companies who usually have political ties to specific parties or candidates. Giving in to strategic polling gives way too much power to our pollsters and political strategists who we know are very selective about when they release a poll, which parts of a poll they release – or whether to release a poll at all.  Polling ruins elections, by marginalizing new and young voices early on in the race – before the campaigns have even started.  Polls are bad for politics, and strategic voting lends legitimacy to polls.

c) Elections aren’t just about who wins. Elections are a survey of values, and every number counts.  It’s the one time, every four years when you are asked what you think about our city.  How could anyone suggest that any citizen should do anything with this rare and precious vote, other than vote with their heart?

On election day, we won’t just end up with a mayor and 44 councillors.   We’ll also have an amazing thing: Over half a million votes, each cast by an independent human being, clearly showing what Torontonians truly believe in.

Voting is supposed to be a free market system, with no trade barriers, no subsidies, no embargoes and no monopolies.  You get one vote.  Everyone gets one vote.  It’s designed as the great equalizer.  Rich, poor.  Tall, short.  Downtown, suburban.  Left, right, green, grey.  One vote each.  And for what purpose?  To pick a mayor?  No.  To express what you believe in.  So everyone can hear.  The new mayor, but also policy experts, from all levels of government.  Editors.  Business leaders.  Professors.  And campaign advisors, who will shape future election campaigns. The proportions of the vote reflect who we are as a city, and everyone is watching.  We are Ontario’s largest market research focus group, and every vote matters.

To be clear, this isn’t a pitch to vote for Joe Pantalone.  I haven’t decided who to vote for, and I’m becoming less decided each day.  All I’m saying is, look at all the candidates, and decide which person most reflects your values and your view of what Toronto is, and could be, and vote for that person.

But what about Ralph Nader? Well, I happen to like Ralph Nader, and I like what he has contributed to US politics, and I wish we had more gutsy people like him engaging in our political system.  Don’t underestimate the immense power that ‘fringe’ candidates can have.  In Toronto, for example, look at the Green Party.  They can’t win a seat, even downtown, but people keep voting for them  – and in increasing numbers.  The NDP accuses them of being vote splitters, of being Ralph Naders.  Personally, I would take that as a compliment.  Even if a Green candidate only gets a few hundred votes, if the following election is a tight race between the Liberals and NDP you can bet that both of those parties will be doing everything they can to get those Green votes. And how do you get Green votes?  By incorporating elements of their platform into your own.  By becoming more Green.  In other words, the Greens can win, without winning.

If you think Joe Pantalone is the best person to represent your views and values, then you should vote for him.  Same goes for Smitherman, or Ford.  Or any of the other 40 people running for mayor.  Heck, I would even argue that if your favorite candidate was Rocco Rossi, or Sarah Thomson then you should still vote for them even though they’ve dropped out.  How else will anyone ever know that you support an Allen Expressway tunnel, or that you wanted to see a female mayor in Toronto (for the first time in 13 years)?

After all, your vote is your chance to be heard.  Don’t relinquish that right.  Each vote for each candidate will have an impact on the outcome, and on future policies, and future campaigns.  Has it occurred to anyone that Barrack Obama’s candidacy and victory was a direct result of Ralph Nader’s candidacy in previous elections?  Maybe the democrats, after losing votes to Nader, had to ask themselves “Why are we losing votes to this guy?  What’s he saying that we’re not saying?  How is he attracting young voters and volunteers? What is Facebook?”.  Without Nader in the picture, it would have been much easier to simply shift to the centre-right and try to erode the Republican vote.  But you can’t shift away from your core support, if someone is around to pick up the pieces.

Never underestimate the influential power of those who come in second, third, fourth or even fortieth.  Check out all the candidates, and vote for your favorite.  The so-called losers in an election, those who were brave enough to stick it out to the end, those who inspired people to vote for them – not out of fear, but out of excitement – those candidates make a difference in the long run.  They can shift the debate, inspire young volunteers, and open up doors for future ideas, future candidates and new possibilities.  But only if you vote for them.

This entry was posted in First-Past-the-Post is Evil, I Have Too Much Time on my Hands, Random Rants, The City is Beautiful. Bookmark the permalink.

28 responses to “Vote with your heart. Monday is a city-wide survey of our values”