UPDATE:  Our Research Day on Aug 3rd was an amazing success. Thanks to all who attended!!  We’re hosting a SECOND day, on Tuesday August 30th.  10am.  Hope you can make it!

I’d like to invite you to a research party next week at the Toronto Archives.   I would happily do the research myself, but there are TEN BOXES of materials to go through and document.  I can’t do this alone, so I need your help.

What are we documenting, you ask?

Well, I’ve always thought that Toronto would benefit from some sort of independent fact-finding organisation that reported to the public on civic affairs.  Then, a couple of years ago, I stumbled upon this: 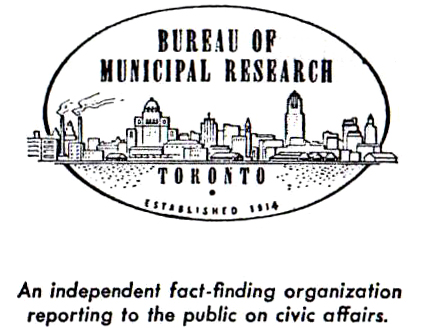 I investigated, and discovered that The Bureau of Municipal Research was founded in 1913, incorporated in 1914, and for about sixty years they produced dozens of amazing non-partisan reports with titles such as:

Should the Metro Toronto Chairman be Directly Elected?

The Public Interest and the Right to Know

Be it Ever so Humble: The Need for Rental Housing in the City of Toronto

The Politics of Waste Management (’75)

Design for Development; Where are you?

Parties to Change: The need for, and viability of, political parties operating at the municipal level. (’70)

Teaching Local Government: A responsibility of the Educational System (May 1978)  Note: I believe this report was written by current Councillor Gloria Lindsay Luby!

Landlord-Tenant Relationships: Time for another look

The Role of the Municipal Auditor

In an era of hyper-polarisation and ideologically-driven policy proposals, the idea of a rational citizens’ voice on local issues is quite appealing.

1) As far as I can tell, the group no longer exists.  I’m not sure if they formally shut down, or if it simply faded away.  BMR would have celebrated their 100th anniversary in 2013.  (I’m thinking of applying for funding to create a 100 year anniversary retrospective exhibit!)

2)) The Bureau inspired a national organisation called the Citizens Research Institute of Canada. Not sure if they’re still around either.

3) Susan Fish was the BMR Executive Director at some point (early 70’s?).  Fish later was elected to City Council as a reform candidate in 76, and then served at Queens Park in Bill Davis’ red tory cabinet.  She also ran for mayor of Toronto in 1991 against Jack Layton, June Rowlands and Betty Disero.

4) Anne Golden was the BMR Research Coordinator at one point.  Golden went on to become the President of the United Way, and authored two important reports: “The Golden Report,” and “Taking Responsibility for Homelessness: An Action Plan for Toronto.”  (Read this recent article by Carol Goar)

5) Over their sixty years of activity, they had some cool logos: 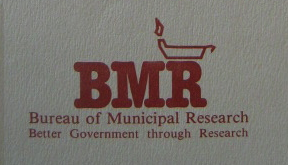 6) There are ten boxes full of BMR reports and documents at the Toronto Archives.  I think it would be fun, and useful, to see what’s in those boxes.

So, join me next week!

BMR Day #2
Tuesday August 30
At The Toronto Archives • map
(meet in the lobby at 10am)
Bring a digital camera, if you have one.

This entry was posted in Community Organising, I Have Too Much Time on my Hands, The City is Beautiful. Bookmark the permalink.